Author: Maurice Savaryego, M.Sc.Eng. (Learn More)
​
(Please note that our website is supported by commissions earned when products are sold through the provided links.)

This article will describe and compare action video cameras GoPro HERO3+ Black Edition and Sony Action Camera HDR-AS30V. These cameras are currently among the top action camcorders according to most independent reviewers, and they were the top two sellers in their category on Amazon at the time this review was written. Note that both Sony and GoPro have unveiled more recent models of their cameras, but given the rich features that the GoPro HERO3+ and Sony HDR-AS30V come with, we think there is no need to pay more for a few additional features you may not even need.

If you are in a rush and wish to see right away Amazon price information for the selected action cameras that will be compared below, please click the following link:
Selected Action Cameras on Amazon

The GoPro HERO3+ Black Edition and Sony Action HDR-AS30V cameras are shown below:

First we can safely claim that both cameras come with all the must-have basic features that a true action camera should be supporting such as:

But differences do exist, and some may explain the price difference. Let's look at them:
Overall, we can say that the two cameras are quite comparable, and your choice of camera should really depend on the additional features that each camera brings.  If you think that the 4Kp, 2.7Kp and 1440p resolutions offered by the GoPro HERO+ is something that you need and that you will be using, or if you'd like to have an LCD screen that attaches to the camera for immediate playback, then you should go for the HERO+. On the other hand, if you want slightly better performance in low-light shooting, or you'd like to have a built-in GPS, then you should definitely go for the Sony. Note also the the Sony HDR-AS30V costs about $100 less than the HERO+.

If you require additional information on these two cameras, please refer to the APPENDIX section below for a side-by-side and point-by-point comparison

If you need additional information to decide, please refer to the comparison table below in the APPENDIX section for a side-by-side and point-by-point comparison of the two action cameras.

Mounting and Other Accessories for GoPro and SONY Action Cams on Amazon:

You can view all the GoPro HERO mounting and other accessories available on Amazon by clicking below:

GoPro HERO Mounting and Other Accessories on Amazon

You can view all the SONY Action Cam mounting and other accessories available on Amazon by clicking below:

SONY Action Cam Mounting and Other Accessories on Amazon

The following table provides a side by side comparison of the GoPro HERO3+ Black Edition and the Sony HDR-AS30V cameras. Following the table, please read the explanations to the notes referred to in the table to have a better understanding of the features offered by the two action cameras. 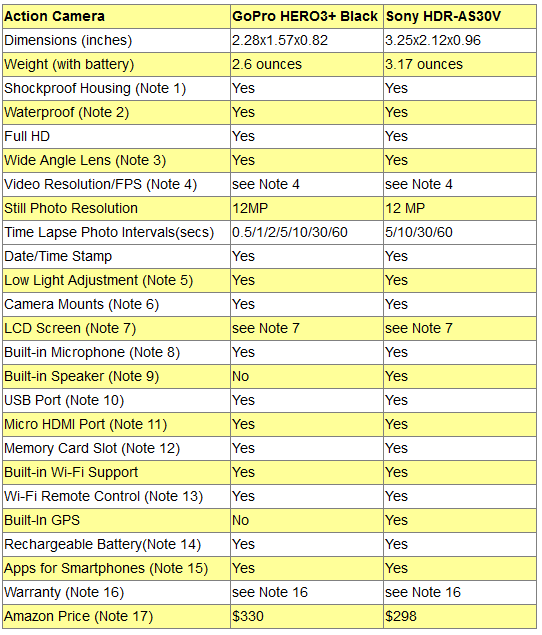 Note 1: Both cameras come with a shockproof and dustproof housing included in the purchase. Note that the GoPro HERO3+ camera can also be housed alternately in a skeleton housing sold separately which features open sides that allow for easy plugging in of cables for live feed video out of the camera, or for charging the camera with a USB cable.

Note 2: When used with the housing, the GoPro HERO3+ camera can be used in waters up to 197 meters (646 feet) deep while the Sony HDR-AS30V camera is waterproof down to 16 feet.

Note 6: The Sony Action cam comes with one universal tripod mount. The HERO3+ comes with adhesive curved and flat mounts, and a 3-way pivot arm. Both cameras provide a whole variety of additional mounts as optional accessories making it very easy to attach the camcorder to your body, helmet, surfboard, bicycle, gear, vehicles, etc. for hands-free shooting in all sorts of situations. Please refer to Amazon secion below for the list of available Sony Action Cam and GoPro HERO3+ optional mounts.

Note 7: Both cameras have tiny LCD screens that are there only to display and adjust menu options. They can not be used for playback of recorded videos. However, an optional LCD touch screen that attaches to the back of  the GoPro HERO3+ camera can be obtained to view recorded videos and photos. The optional LCD screen comes with an integrated speaker, volume control, and 3.5 mm headphone jack.

Alternately, since both cameras have built-in Wi-Fi support, they can sink with your smartphone, and you can view your recorded videos on your smartphone using the available free Android and iPhone apps. The Sony camera also supports NFC (Near Field Communication) to sink with the smartphones.

Note 8: Both cameras have internal stereo microphones. But the ProGo HERO3+ can also be used with an external microphone via the mic jack integrated into the multi-use mini-USB port.  The user needs to supply a mini-USB to 3.5mm converter cable to use the external microphone.

Note 9: Though the GoPro HERO3+ does not have a built-in speaker, the optional LCD touch screen that attaches to the back of  camera is equipped with an integrated speaker with volume control.

Note 10: Both cameras come with a mini-USB port that is multipurpose and that can be used to recharge the battery, file transfer or firmware upgrades.  On the GoPro HERO3+ cam, this mini-USB port can also be used as a 3.5 mm microphone input or an analog video output with the aid of optional adapter cables.

Note 11: Used for video out. By connecting the micro-HDMI port on either camera to your HD TV, you can view your recorded videos in HD.

Note 13: The Wi-Fi Remotes for both cameras are waterproof  and wearable. The Gopro Remote Control device can control up to 50 Wi-Fi-enabled GoPros at a time from a range of 600'.

Note 14: Both cams use rechargeable lithium-ion batteries. The batteries are recharged via the USB port on the cameras. Note that for extended recording, the HERO3+ has also a 30 pin connector for latching on an external battery sold separately.

Note 15: Free smartphone apps (iPhone and iPhone) are available for both cameras for remote control of the cameras and to transfer recorded videos form the camera to the smartphone for viewing. While the ProGo communicates with smartphones using Wi-Fi, the Sony Action Cam can be communicated with using both Wi-Fi and NFC (Near Field Communication).

Note 17: Amazon prices usually include a good discount on the List Price. Note that prices may change at any time. For exact prices see the Amazon products section above.

Have you found yet the camera you were looking for?
Global Amazon Search