Author: Maurice Savaryego, M.Sc.Eng. (Learn More)
​
(Please note that our website is supported by commissions earned when products are sold through the provided links.)
​

The following pictures show the  selected digital Pianos.  Following the pictures, you will find a detailed comparison table to help you choose the best digital piano that will respond to your family's needs. Please read carefully the Table Notes which explain in detail the features supported by the compared Yamaha and Casio digital pianos. 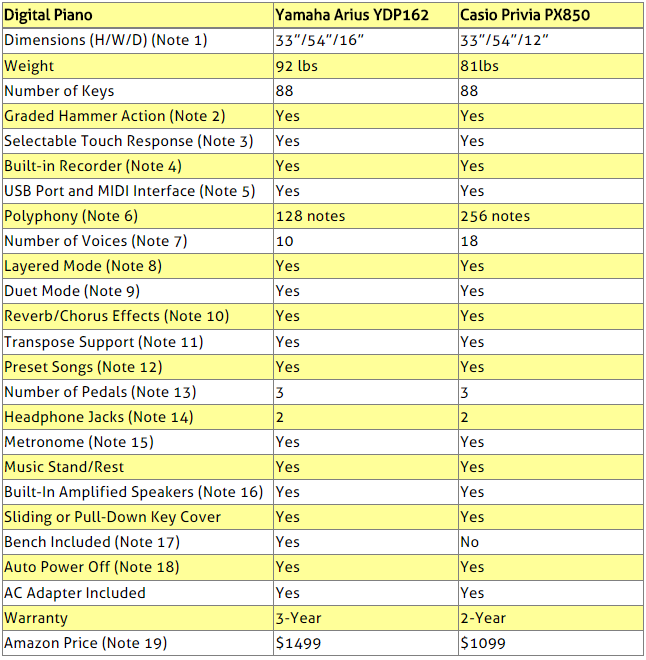 Note 1:
The specified height does not include the music stand/rest which could be an additional 6 to 8 inches.

Note 2:
Graded (or Weighted) Hammer Action means that the keys of the electric keyboard are weighted to simulate the feel of a real piano. Graded Hammer Action requires heavier weights toward the bass end and lighter weights toward the treble end of the keys, which more closely resembles how an acoustic piano feels and sounds. Both the Yamaha and Casio digital pianos chosen here for comparison come with this feature.

Note 3:
Touch Response (or Touch Sensitivity) is how the piano sound responds to the way the keys are played. Most digital pianos offer various types of keyboard touch sensitivity settings. These are also known as “velocity” sensitivity settings and can help the player adjust the keyboard to his or her playing style.
Yamaha Arius YDP162 provides 4 settings for touch response (Hard,Medium,Soft and Fixed).
Casio Privia PX850 provides 3 levels of touch response (1,2 and 3).

Note 4:
The Record feature found on the selected Yamaha and Casio digital pianos is a great way to capture a performance and play it back to hear your progress. Both the Yamaha and Casio digital pianos are equipped with two tracks for recording. This means that, when playing a piece of music, you could record the left hand music to one track and the right hand music to the other track. This is a useful feature as it will allow you to practice one hand, while your piano plays the other.
You could also record to each of the two tracks different versions of the same song using different voices and effects and then play both tracks together for surprising results.
Note that for a given piece of music, both tracks can be played at the same time, and you can also turn off one track and play back just the other track, if desired.
Any recorded music on either track can easily be deleted when not needed anymore.
In general, digital pianos record the music to built-in memory, but when the piano is equipped with a USB port, music can also be recorded to and played back from a USB flash drive or a USB connected computer (please refer to Note 5 for more info on USB interfaces on these pianos).

Note 6:
Polyphony is the maximum number of simultaneous voices that a digital piano can generate. If a digital piano has a low level of polyphony, then some voices may be abruptly cut off when you use the sustain pedal while playing complex chords. If, as a beginner, you don’t want to pay too much for the piano, you will not really need a high polyphonic digital piano.  However, as you progress, you will eventually start playing more complex pieces of music, and higher polyphony may become important to you so that your digital piano can respond to your skill level.
With 256 voices, the Yamaha Arius YDP162 offers the highest level of polyphony, while  the Casio Privia PX850  offers 128 voices.

Note 10:
The Reverb effects simulate playing in a room or hall where the sound reverberates off the walls and ceiling. Digital pianos provide a number of selectable Reverb levels that correspond to different room or hall sizes. The Chorus effect adds depth and width to the selected keyboard voice.  Usually when a particular voice is selected on the piano, the appropriate effects will turn on automatically. But they can be modified if desired.
The Yamaha and Casio pianos implement these effects in different ways:
Yamaha Arius YDP162: There are four Reverb levels (room/ hall1/hall2/stage) that add extra depth and expression to the sound and create a realistic acoustic ambience. Here there is no separate Chorus effect to select. The appropriate Chorus effect level gets automatically integrated into the selected Reverb level to provide the sound with the required depth.
Casio Privia PX850: There are four Reverb levels (room/ hall1/hall2/stage) and four Chorus levels (light/medium/deep/flanger) that are explicitly selectable.

Note 13:
The three pedals are for Sustain, Sustenuto and Soft play.
Pressing the Sustain pedal while playing will cause the notes you play to reverberate for a long time. Releasing this pedal immediately stops any sustained notes.
Pressing the Soft pedal while playing suppresses notes played on the keyboard after the pedal was pressed, and makes them sound softer. The notes played before this pedal is pressed are not affected.
Pressing the Sostenuto pedal while holding the notes will sustain the pressed notes (as if the Sustain  pedal had been pressed), but all subsequently played notes will not be sustained. This makes it possible to sustain a chord or single low note, for example, while the other notes are played “staccato”.

Note 14:
Connecting headphones to either of the 2 headphone jacks cuts off output to the speakers, which means you can practice even late at night without bothering others.

So which of these two pianos to buy?

Therefore, given that, as shown in the comparison table above, both pianos come with all the important features digital pianos are supposed to have, and that the Casio costs about $500 less than the Yamaha, for home playing, the Casio Privia PX850 remains also an excellent alternative to the more expensive Yamaha Arius YDP162. Note however that a bench is not always included with the Casio PX850, but bundled Amazon product offerings that include the bench are also available (see Amazon products section below).

Please click the Amazon US link image below for the piano of your choice to see exact price information or to purchase.
​
Please Note: For non-US customers, when you click the links below, you will be provided with the Amazon links for your country (such as Canada or UK), if the product is available in your country.

Note:
Yamaha has more recently produced a new version of the YDP162 piano in the Yamaha Arius series: the YDP163.
YDP163 is similar to YDP162 with respect to dimensions, weight and almost all other features. The following are the notable differences: ​The rest of the Yamaha YDP163 features are the same as YDP162 as described in the comparison table above.
For more information on Yamaha YDP163 or to purchase, please click below:

Please note the following UPDATE:
​
Casio has more recently produced a new version of the Privia PX850 piano: the PX860.
PX860 is similar to PX850 with regard to cabinet design, control panel, internal sound system and the various functions it provides. But there are some improvements to the actual piano sound and the various instrument voices that it reproduces. There is also a new reverb setting which   generates the sound you would hear in a large concert hall where there is natural echo.  In addition, high-quality audio recordings of 10 live philharmonic orchestra performances are installed. Pianists can play along with these recordings and enjoy the feeling of participating in a magnificent performance. Musical scores of the music are also included.
For more information on the PX860 or to purchase, please click below:

Have you not found what you were looking for?
Global Amazon Search