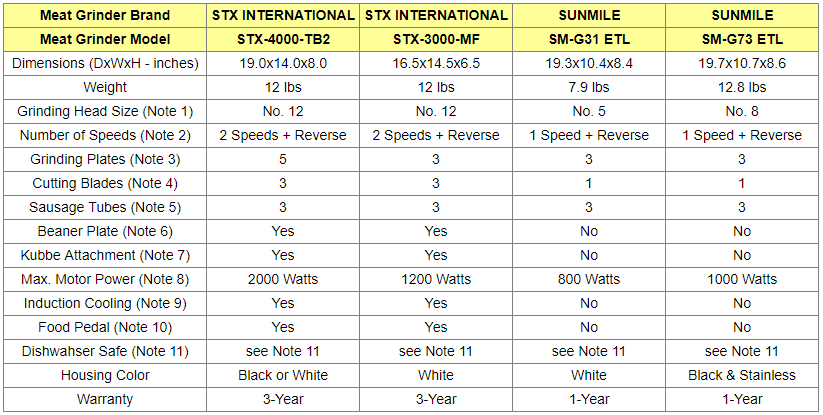 Note 4:
Note 5:
All four products come with three sausage stuffing tubes.
The diameter of the sausage tubes are: 3/4-inch, 5/8-inch and 1/2-inch.

Note 6:
Only STX-4000-TB2 and STX-3000-MF come with what is called a "Beaner Plate", otherwise known as a Sausage Stuffing Plate. Though they are not absolutely required to make sausages, these plates are made specifically for use in electric meat grinders to stuff sausage as they let more sausage flow through the grinding head into the sausage casing.

Note 7:
STX-4000-TB2 and STX-3000-MF come with a Kubbe attachment. Kubbe is a traditional Middle Eastern dish made with a cylinder-like shell that is stuffed with a mixture of spicy minced lamb and bulghur filling and the ends of which are sealed to form the Kubbe which is then deep-fried.

Note 8:
Note 9:
STX-4000-TB2  and STX-3000-MF are equipped with a special induction cooling system that cools the motor of the grinder when running. This is especially helpful if you are grinding bones and/or large quantities of meat. The STX-4000-TB2 and STX-3000-MF pictures above shows the air induction hood on top of the unit which looks like an air foil on the hood of a race car. The 4 air-cooling Intakes make up a patented Quad Air Cooled Design which is engineered to keep these grinders' motors ultra cool, and this will virtually doubles the life of these units.

Note 10:
Note that using the foot pedal is optional and not required to operate the STX INTERNATIONAL units.
​
Note 11:

So, which of the four meat grinders to buy?

The four meat grinders considered had received very good average ratings from Amazon customers at the time this article was written. Indeed, both STX-4000-TB2 and STX-3000-MF had received 4.5 stars (out of 5 stars), while SUNMILE GR-31 and  SUNMILE GR-73 had received 4 stars. There is a good chance that you would be quite happy with any of these four products. However, there are some differences that make the STX INTERNATIONAL meat grinders more desirable:
In addition, keep in mind that:
​Of course, all these additional features make the STX INTERNATIONAL  grinders more expensive than the SUNMILE grinders. But, if you can afford them, we definitely think they are worth investing in them.

Please click the Amazon US link image below for the meat grinder of your choice to see exact price information or to purchase.
​Please Note: For non-US customers, when you click the links below, you will be provided with the Amazon links for your country (such as Canada or UK), if the product is available in your country.​
​

Have you not found yet what you were looking for?
Global Amazon Search